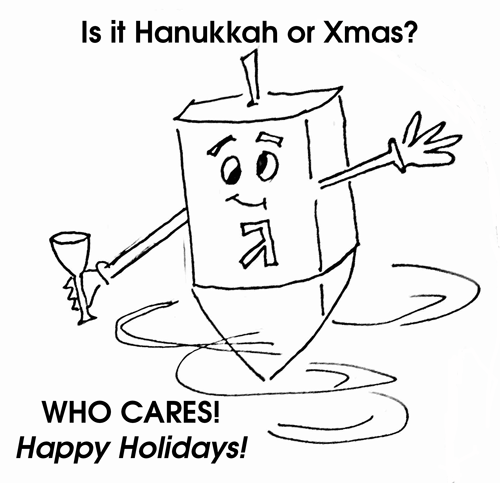 8 Days, 8 Nights and So Many questions

Hanukkah is like that weird kid in middle school your mother forces you to hang out with. TV executives and magazine editors meet about holiday content only to end a productive creative brainstorming session with, “Crap, we forgot about Hanukah.”

But this year, things are different. Adam Sandler has given us part 4 of the much acclaimed Hanukkah song and we are introducing Hanukkah, Christmas style (because…well, Christmas is more popular and, when necessary, we are not above giving into peer pressure…also South Park has taken a backseat since Book Of Mormon won a Tony and what’s a Hanukkah song without a Hanukkah poem).

Twas the night before Hanukkah, when all thro the house

Not a creature was stirring, not even a mouse;

But “night” is misleading since of them we have eight

And with no hopes of Santa, there’s no reason to wait

Nor nutcracking soldiers parading with drums

But as Mama and Papa tucked in for their sleep

On our lawn was a clatter, a bang, and a beep.

I sprang from the bed to see what was the matter

I wondered what caused such a bang beep and clatter.

Away to the window I flew like a flash

Tore open the shutters, and threw up the sash.

The moon on the breast of the new fallen snow

Gave the lustre of mid-day to objects below.

When, what to my wondering eyes should appear,

But Judah the Maccabee with his helmet and spear.

With an army behind him, I watched them come near

And Judah called out in a voice loud and clear,

“Mattathias, my father, and my brothers of four,

The story that beckons this Festival of Light.

A Greek king, Antiochus, deemed our religion a crime

So to war we did go for a full three years time.

Triumphant we were but our Temple desecrated

So we worked to rebuild for a new dedication

The menorah had to be lit with purified oil

But only one jug could be found amongst the turmoil.

We lit the lone candles, knowing their light was short lived

But for eight whole days, their light did not dim.

A miracle it was that our candles stayed bright

And for this we rejoice every year with new light

For each day of this holiday one candle gets lit

Until the flames of eight candles flicker and flit.

So remember our fight on these eight days of glory.”

And thus he concluded the Hanukkah story.

And away they all flew, like the down of the thistle:

But I heard him exclaim, ere he drove out of sight-

Happy Hanukkah to all, and to all a good night.

« Previous Post
Next Post »
« The Sorry Song: Holidays
Kanye West Rapping Paper »
This site uses analytics, cookies and/or other 3rd party technologies that may have access to your data, which are used to provide a quality experience. If you do not agree, opt out and we will not load these items, however, necessary cookies to enable basic functions will still load. Visit our Privacy Policy to learn more.
I Agree I Disagree
Contact Us:
Email us at cs@pypo.com for requests involving data we collect. View our Privacy Policy for more info.
Opt In / Out:
To change your opt in settings, please click here to opt out or in. Or, close this popup.