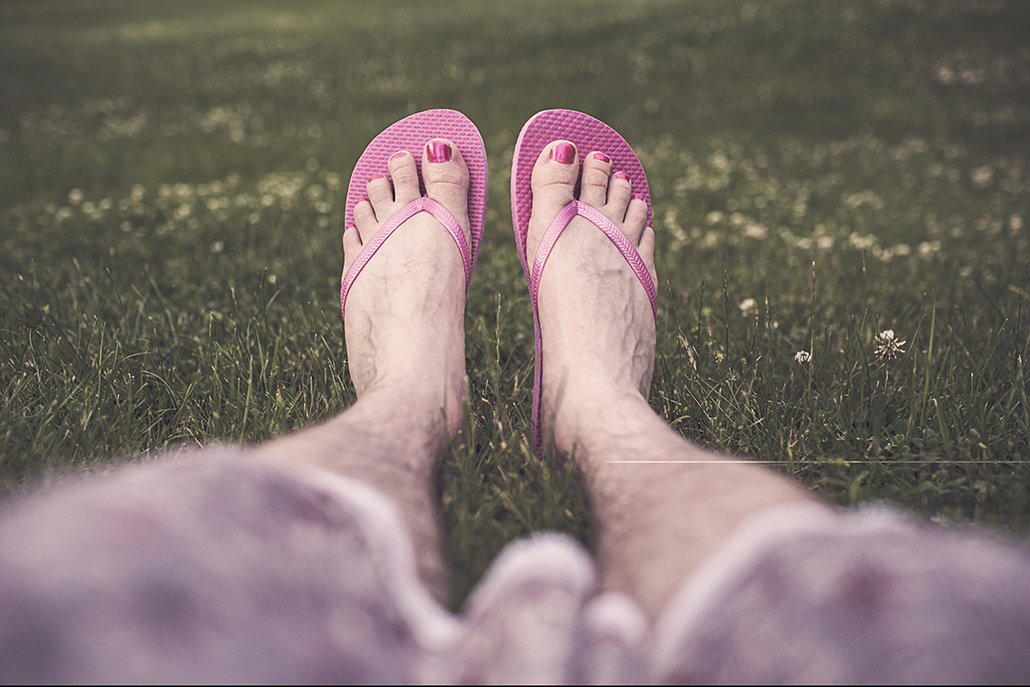 I showed up for my usual mani pedi and was assigned a chair, only to have a young man sidle up on the stool, grab an Emory board and start filing.

When I was single and profligate with my spending, I got weekly mani-pedis at this garish, Asian-themed spot a few blocks from my shoebox apartment. It was cheap but had the patina of an upscale salon: customers got to choose from an array of scented oils which would infuse their pedicures (my preference was always bergamot, whatever that is) and the lady in charge served ginger tea in little glass cups whether you wanted it or not. It was all very relaxing, a haven for an hour where I could close my eyes and focus on the sound of water flowing down one of those mini-waterfall plants you can buy from Brookstone.

I was a regular for at least a couple of years until one Sunday I showed up as per usual and was assigned a chair, only to have a young man sidle up on the stool, grab an Emory board and start filing. Sure, I’d seen plenty of men line up for pedicures, but never once had I seen a man actually perform one. I won’t lie: I instantly felt uncomfortable as he hunched over my feet and inspected them. For the next thirty minutes, my mind ping-ponged with all the thoughts he must have been thinking:

Jesus, that is some crazy stubble. Like, Gerard Butler in 300 stubble. I better be careful—I might actually knick myself. I don’t get it, she knows she has to roll up her pants, right? What’s this—remnant of a mosquito bite? Something worse? I better not touch it, could be contagious. Shit, I think I touched it. Boy, does it look angry. This is a pretty fugly color. Doesn’t she know she can’t wear red with orange undertones? Her skin is too sallow. No, she needs gem tones. Garnet. Ruby. This color is just weird. I’ll paint her big toe slowly, maybe she’ll change her mind. That is one fucking crazy big toe. And that callous! Looks like a sidecar! My god, I’d need a commercial grade floor sander to get rid of that thing. She’s gonna have to pay extra for that.

It went on like that for the entire pedicure, me mentally narrating his imaginary conversation about my feet. And I left an hour later feeling wiry and tense. When I confided in my husband later the afternoon, he laughed. “For someone who professes to be so open minded,” he mused, “This seems kind of sexist to me.”

Was it? Was my palpable discomfort with a man buffing and polishing my toes actual sexism? I sat with that for a short while, trying to unpack why I felt such intense discomfort though the guy barely even acknowledged me. And it didn’t take long for me to realize that I felt judged in a way that I didn’t quite feel when my feet were in a woman’s care; I assumed a woman could detach herself from the work, but a man could not help but size me up. Because that’s what men do—they size up women.

That’s when my husband helpfully suggested a week in Bellevue, where I could be tended to by a team of mental health professionals. And after that, he added, “Just go somewhere else.”  Of course I did. Very rarely since have I encountered a male manicurist, though it’s happened. And when it does, I always want to lean over to the woman sitting next to me and ask, ideally in another language I somehow intuit that only the two of us know, what do you think—am I nuts? But then, I remember the old adage my mother is find of telling me: If you have to ask…

« Previous Post
Next Post »
« GREAT EXPECTATIONS
The Under-Appreciated Mediocrity »
This site uses analytics, cookies and/or other 3rd party technologies that may have access to your data, which are used to provide a quality experience. If you do not agree, opt out and we will not load these items, however, necessary cookies to enable basic functions will still load. Visit our Privacy Policy to learn more.
I Agree I Disagree
Contact Us:
Email us at cs@pypo.com for requests involving data we collect. View our Privacy Policy for more info.
Opt In / Out:
To change your opt in settings, please click here to opt out or in. Or, close this popup.